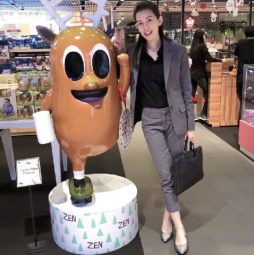 Papitchaya (Nelly) Wisankosol graduated with a Bachelors in Political Science (International Relations) from Thammasat University in 2006. She also obtained two more Bachelor’s Degrees from Ramkhamhaeng University in Humanities (B.A.) and (Industrial and Organizational) Psychology (B.S.) in 2007.

After graduation, she pursued her dream of traveling to as many countries as she could. The journey started from the other side of the world – the United States. From there, her travels took her to England, Scotland, Wales, Ireland, Switzerland, France, Italy, Egypt, Japan, Korea, China, Hong Kong and the Philippines.

While in England, she was hired as an assistant restaurant manager in De Vere Arms Hotel. In 2008 she studied for a Master’s degree in International Business (MIB) at University of Wollongong (UOW) in Australia. She returned home in 2009 and started working at BWT (Thailand), a multinational corporation as an executive assistant to the President before being appointed as the company’s marketing manager.

In 2009, Papitchaya pursued a PhD in Organization Development at Assumption University. Together with her experience in consulting, she became a marketing & communication consultant for a number organizations including Astoria MC Srl (Italy) and Kokando (Japan). She is currently a Marketing Executive Director and Associate Program Director (of PhD Organization Development) in Assumption University of Thailand.