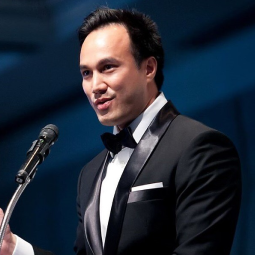 Prom Sirisant is a passionate and result-driven individual with proven successes in both the business sector as well as non-profit initiatives. His strategic thinking ability combined with relentless determination to execute led him to deliver outstanding results for the organizations and entities he works with. He is a people-person with high integrity who demonstrates leadership and strong communication skills able to influence, inspire, and encourage others.

Prom was appointed by Australia’s Minister for Foreign Affairs as one of twelve Global Alumni Ambassadors. Under this role he joined AAA (Thailand). He works with Australian Embassy and other entities in growing Australia’s global alumni community, raising the profile of Australia’s world class education system, and strengthening ties between Australia and Thailand.

He was also appointed by UNWOMEN as one of Thailand’s HeForShe Campaign Ambassador. He pursues his passion to make a difference in the society and drives the agendas that he sees are important. Under this role, he works closely with various Embassies as well as private and public sectors in the effort to narrow the gender equality gap in Thailand.

In his professional career, Prom joined Asia Plus Group Holdings Public Company Limited in 2014. A well-respected financial services company and public listed on Stock Exchange of Thailand. He joined as Head of Strategy and Business Development and within 2 years he was appointed as Chief Strategy Officer and group’s Senior Vice President.

His main responsibility is to ensure that the group’s strategic direction is sound, bringing structure into alignment with strategy, and developing the processes and skill bases necessary to realize the strategic intent. Prior to joining Asia Plus, he spent seven years with the world leading packaging company, Tetra Pak. His latest position oversees the Portfolio Strategy team. He travelled extensively and led crossed regional teams. He was responsible for nine countries, covering both South Asia and Southeast Asian markets.

Prom spent a majority of his growing up years in Australia. He graduated with a Master of Business in International Marketing from UTS, and Bachelor of Business Administration from Macquarie University. He is an outspoken advocate of Australian education as he believes that not only it equipped him with strong foundation of knowledge and academics but being a part of the modern Australian society also taught him tremendously about life.

Being in Australia gave him the opportunity to experience life to the fullest and gave him a great mind-set on how he sees the world. As he said, “With a society that is down to earth, multi- cultural, and hardworking, it gives any individual the absolute right mix of lifelong lessons”.